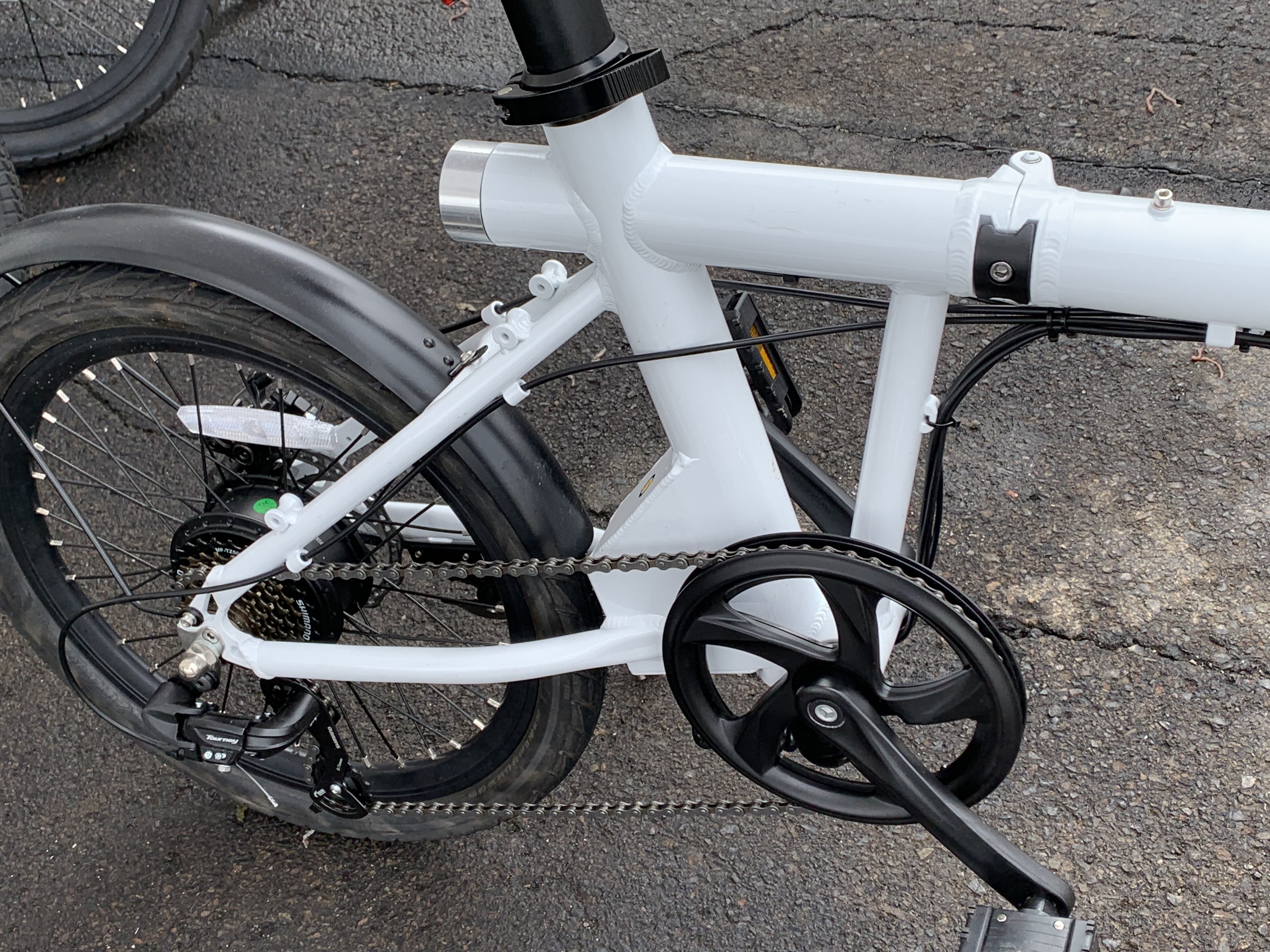 As demand increases and manufacturing make improvements batteries are evolving. They are getting smaller and so much lighter. And they are also becoming more powerful. But they still are a source of weight on an electric bike.

Placement and size matter. We try to get as lightweight a battery as possible. But you still want it to provide a good distance range per charge. It always depends on your needs and usage of the bike.

Battery Mounted on The Rack

You can have the battery mounted to the rear rack of your bike. This is a high place for the battery and can affect the handling when doing a conversion.

The most common battery position is on the down tube. This is in the center of the bike, the weight is low and improves handling. Some are mounted on the top of the tube and some are integrated in a larger tube.

Some electric bike batteries are mounted under and behind the seat. Others are part of the frame of the bike.

So, how far can you go when your battery is fully charged? Be aware that the ranges are typically estimated. The actual range you’ll get will depend on a number of different factors. One is how much you actually pedal. And two how much you use your throttle – if your bike has one. Your weight, the bike, and the use also need to be factored in. Temperature and road conditions also impact the range. But expect an average of 20 miles from a 6-8 pound lithium battery if you’re using just the throttle.

To give you a basic understanding of what these mean – the voltage is what gives the speed. It’s the strength.

Amps is a measure of force. The quantity. The higher the voltage – typically – the faster the bike.

The combination of the two – volts and amps = watts. And watts are what define the power output.

On your batteries and battery pack, you’ll find some fine print.

Volts – as said – the more voltage the faster the bike.

Amp hours – (Ah) = is how many number of amps a battery can sustain for one hour.

Watt Hours = Actually this is the most useful and accurate number – if its available. So in plain speak:

The best way to get the most out of your lithium battery is to keep it charged. To increase your battery’s life and performance don’t let it get deeply discharged.

The Lifespan of The Battery

A battery lifespan is rated in cycles. This means that one full cycle is the complete discharge and re-charge of it. If your battery is rated for 1000 cycles it doesn’t mean that at the 1000th cycle your battery will quit. Most batteries are rated to 80% of their capacity. And what this means is that the stored energy will go down over time. So at its 1000th cycle, it would have about 800 watt hours capacity.

Keep your battery in a cool place. Heat isn’t good for it.

Determine What You Need

Most of the time you won’t go over 20 miles at once. You might go out a few times a day. Or for a short errand, a trip to the beach, lake or park.

If your needs are more such as using your bike to haul kids, pets or groceries or distance you need a strong heavy bike, battery and motor. So think about your style before purchasing.